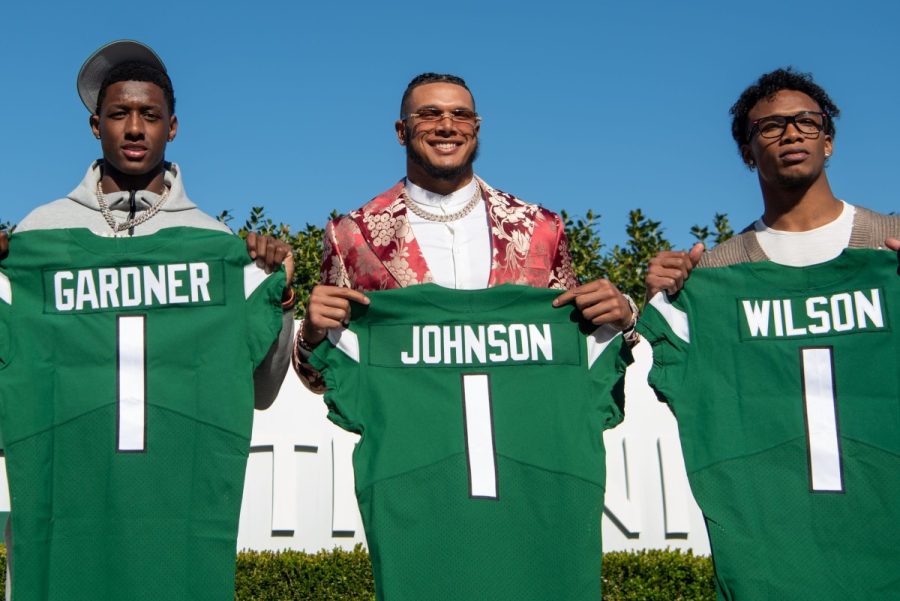 The 2022 NFL Draft is now at a close. Some teams did absolutely phenomenal and others did absolutely horrendous. Let’s take a look at 5 teams who did well and 5 who did not.

The Eagles were able to find addition to their DT depth with Jordan Davis, who will also replace franchise star Fletcher Cox when he finally retires or has a far decline. They were also able to obtain star WR A.J. Brown from the Titans in exchange for their other first round pick and a third round pick (which is a bag of peanuts for him). The Eagles were also able to get an absolute steal with LB Nakobe Dean in the third round, as he was projected to be a first round pick going into the draft. The Eagles made sound picks through the rest of the draft as well and should expect to have success with their 2022 draft class.

No offense to Travon Walker, but he should not have been the number 1 pick in the draft. The Jaguars should not have even picked someone from his DE position, but since they did, Walker was not even the best player at that position, it was Aiden Hutchinson (who went right after Walker). The Jaguars also failed to address an important need throughout the draft as well: Wide Receiver, which they will need especially now since DJ Chark left for the Lions. They also double-dipped with corner and linebacker, which I am not a fan of.

The Jets had arguably one of the best drafts in NFL history. They were able to get three stud players in the first round with CB Ahmad “Sauce” Gardner, WR Garret Wilson, and DE Jermaine Johnson II. They were also able to address their need of a RB with Breece Hall in the second round, and obtained players for other areas of need including TE with Jeremy Ruckert and OT with Max Mitchell. Shoutout to DE Micheal Clemons, who was their final pick and was taken in the fourth round. They addressed positions of need and spread the wealth across multiple positions, a solid draft for the Jets.

No offense but who is Tyler Johnson and why was he taken ahead of other top prospects at his position? Jerry needs to hang it up and just sit in the owners box (not that I’m unhappy they did bad since I’m an Eagles fan, but still). That’s all I have to say, Dallas was down bad this draft.

The Falcons were able to address several positions of need throughout their draft as well and add star talent to their roster. With the 8th pick, they were able to get USC WR Drake London, a key need for them since losing Julio Jones last offseason and a need especially now due to Calvin Ridley’s year-long suspension. London will be a good addition as a pass catcher on top of Kyle Pitts for this year, and will be a key piece for the foreseeable future in the Falcon’s offense as he will be a part of their new pass-catching trio with himself, Ridley, and Pitts. The Falcons were also able to get a stud in Penn State DE Arnold Ebiketie in the second round, who is an absolute beast on the defensive line and will serve the Falcons well. Most importantly, the Falcons were able to draft their new face of the franchise in Cincinnati QB Desmond Ridder. Ridder has proven time and time again in college that he is capable of being an absolute superstar and a great leader of a team, as he has had much success at Cincinnati over his career there, and was able to lead them to a College Football Playoff appearance- the school’s first ever. He should do great things in Atlanta, he’s even promised a super bowl, lets see if it comes to fruition. The Falcons made sound picks through the rest of the draft too. Overall solid draft for the Falcons.

Throughout the draft, the Ravens made some solid picks across several areas. However, their performance in Round 1 destroys what they did though the rest of the draft. The Kyle Hamilton pick was solid, but what they did in the late first round baffles me. After making their only selection in the 1st with Hamilton, they decided to trade back into the first round and draft Tyler Linderbaum, the center from Iowa (which is a position of need). However, the price that they paid to get Linderbaum was a horrendous decision by the Ravens front office, trading their WR 1, Hollywood Brown, to the Arizona Cardinals. Trading Brown to the Cardinals for the pick they drafted Linderbaum with is essentially giving up their WR 1 for a bag of peanuts. Brown is nowhere near the best WR in the NFL, but he was a crucial part of the Ravens offense, and his loss will only damage them down the line.

The Lions were able to get a generational talent with DE Aidan Hutchinson at the number 2 pick. Hutchinson was also the best player in the draft. Then were also able to get QB Jared Goff a much needed weapon with Alabama WR Jameson Williams, who was arguably the best receiver in the draft. They made good picks across several areas of need throughout the rest of the draft as well, and will be able to look forward to a promising draft class for the 2022 season.

To start off a not-so-good draft for the Vikings, they traded back from the 12th pick to the 32nd pick with the Lions (which was an absolute fleece). The Lions picked their next star receiver with that selection, while the Vikings took Georgia Safety Lewis Cine, who is a good player, but not the best they could have gotten with the 32nd pick. The Vikings made a decent pick with Clemson CB Andrew Booth Jr. in the second round, but made a few lackluster picks throughout the rest of the draft, including taking players in positions they already had picked from, and players where they already had plenty of depth on their pre-draft roster. Not the Vikings’ greatest draft performance ever, but at least the picked Justin Jefferson. 🙁

The Steelers were able draft Big Ben Rothlisberger’s replacement and get their new face of the franchise in Pitt QB Kenny Pickett. Pickett has plenty of upside and has showed flashes of greatness in several big wins across his final season at Pitt. He has also been compared to current NFL star Joe Burrow (aka Joe Shiesty aka Joe Brrr) on multiple occasions. My personal favorite pick by them (and in the draft) was the drafting of Georgia WR George Pickens in the second round. The Steelers have needed a true WR1 ever since Antonio Brown left after the 2018 season, and Pickens offers them just that. He played incredibly during his time at Georgia and would arguably have been the first receiver taken this year had he not been hurt for most of the 2021 season. The Steelers were also able to pick a solid prospect at receiver in Calvin Austin III from Memphis. Austin adds a lot of speed to their receiving game, something else that they have needed since Brown left, as Austin ran a 4.32 40 yard dash at the NFL Combine. I’m usually not a fan of double-dipping at the same position, but receiver is an exception for me, as they can always be used, and were especially needed by the Steelers after losing JuJu Smith-Shuster in the offseason as well. The Steelers got their new face of the franchise, superstar talent, speed, and depth in the WR position, and made solid picks throughout the rest of the draft. A solid draft performance by the Steelers.

The Bengals had a pretty solid offseason going into the draft, they already had a solid offense and added depth to their O-line, which was much needed. However, there draft choices were questionable. They drafted two corners, which was an area that could use improvement, but not an area that was worthy of two draft choices, and they took two D-lineman as well, which was not even much of a need for them, let alone an area that they spent two picks on as well. The Dax Hill pick was alright in the first round and their drafting of O-lineman Cordell Volson from North Dakota State was pretty good, as their O-line can still improve, but overall not a very good draft for the Bengals.

As of right now, that’s how I feel about the 2022 NFL Draft. We’ll see if my opinions hold up once the season gets underway.