On the Hunt: Whitetail Rut Heating Up in South Jersey 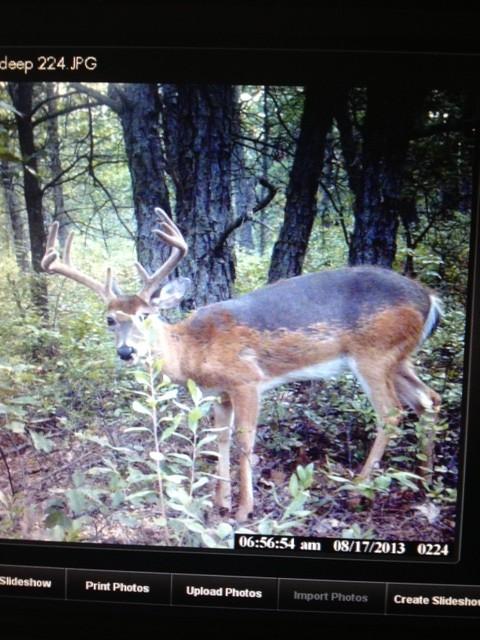 This 10 point buck was captured by my trail camera earlier this season.

Many people begin to think of the fall festivities and holiday cheer, but there is a certain group of people that starts to think about something else: hunting.

Big bucks get on their feet chasing does in daylight hours, and for a hunters it is the greatest time to be in the woods. Many hunters love the rut because they see deer. The hunt becomes exciting.

It is good to know when the rut occurs, but do those who hunt really know the tactics to increase their chances of taking down that dream buck?

According to the November 2013 edition of Field and Stream magazine, the rut can be broken down into three phases: the pre-rut, peak rut, and the post-rut. Each phase should be hunted a different way, and I’ll break down the tactics hunters need to use in each one.

The pre-rut, which occurs in early November, is a great time to hunt because its very exciting to see the first signs of the rut and seeing those bucks around in daylight hours. The pre-rut is a great time to find a nice buck scrape and sit on that scrape. Take out those old horns that have been sitting around for a year and start rattling and calling those bucks in. Bucks will respond best to those calls during this phase of the rut.

After the pre-rut comes to an end, the absolute best time to be in the woods approaches and that is the peak of the rut. Bucks almost disregard humans in the woods and are only concerned with breeding the does. This is time for hunters to pack a lunch and sit from dark to dark because the chances of seeing a shooter buck are increased dramatically.

The post-rut is a period of time which many hunters overlook but can be a time that they could have their shot at taking down a monster. Hunters should go back to the scrape from the pre-rut and sit on it and hunt is hard. Some bucks are frustrated that they didn’t have a chance to breed and they will go back to those scrapes and tear them up looking for any chance they have to fight another buck.

My Experience with Each Phase

My personal preference is to rely on calling bucks in because I have had my best luck doing that. I will have an all day sit once in awhile but its hard to find the time to get out there all day. Drivers should be aware because the deer are not as worried about cars on the road and the amount of deer hit goes up significantly during all phases of the rut. Drivers should be aware if they are driving in a spot where deer are constantly crossing.